“The best part of myself.  That’s what you are.  Do you think I’m going to leave it to the vulgar pawing of a second-rate detective who thinks you’re a dame?  Do you think I could bear the thought of him holding you in his arms, kissing you, loving you?” 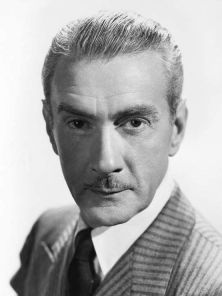 Webb does seem to be the oldest actor to have achieved film stardom.  He was 54 when Laura was released in 1944.  As the intriguingly-named Waldo Lydecker, Webb was a man obsessed with the young, beautiful title character (Gene Tierney) and rather she be dead than end up with a lowly detective (Dana Andrews) investigating her presumed death.  For Laura, Webb received a Supporting Actor Academy Award nomination.

Born in Indianapolis in 1889, Webb became a song and dance man in theatrical revues and also performed in Noel Coward’s famous play Blithe Spirit.  Hollywood, specifically 20th Century-Fox, beckoned as World War II wound down, and Webb spent his entire career with that studio.  It served him well. 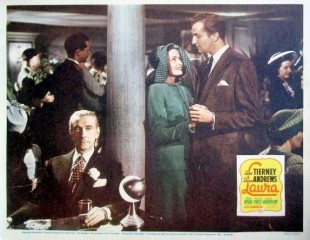 Frequently he had the best lines, as in The Dark Corner (1946):  “I never confuse business with sentiment—unless it’s extremely profitable.”

Webb excelled at persnickety snobs in these early years.  A prime fuss budget character was his Elliott Templeton in The Razor’s Edge (1946), and he scored a Golden Globe for Best Supporting Actor and another Academy Award nomination for Supporting Actor.

In 1947 he was nominated for Best Actor by the Academy for his role as the fussy Mr. Belvedere in Sitting Pretty, the gentleman who became nanny for the three unruly children of parents played by Robert Young and Maureen O’Hara.

Cheaper by the Dozen (1950) was a popular favorite based on the successful 1948 semi-autobiographical book about the 14-member Gilbreth family in which Webb portrayed time-motion engineer Frank B. Gilbreth.  Jeanne Crain, one of

Webb played the iconic march king John Philip Sousa in Stars and Stripes Forever (1952).  In Titanic (1953), his well-heeled gentleman was at odds with his estranged wife over custody of their son.  The wife was played by Hollywood icon Barbara Stanwyck, but such was Webb’s status at that time that he got first billing.

CinemaScope had been introduced at Fox that year with The Robe.  The widescreen process was suitable not just for historical epics but contemporary films made in somewhat exotic or at least colorful locales.  It was no hardship for Webb and the rest of the cast (Dorothy McGuire, Jean Peters, Maggie McNamara, Louis Jourdan, Rossano Brazzi) to relocate to Italy for Three Coins in the Fountain (1954).  The title song won the Academy Award and became a standard. The film was nominated for Best Picture.  Webb was top-billed again.

The same year Webb headed up another powerful cast in Woman’s World (September, 1954).  This time out he was owner of a car manufacturer looking for a new general manager.  He evaluated three men—and their wives—to find the appropriate replacement.

It was no stretch for Webb to portray an Englishman in The Man Who Never Was (1956).  As Lt. Commander Ewen Montagu, his character coordinated the ruse that confused the Germans about the Allied invasion of Sicily during World War II.

According to Wikipedia, Webb was set to star in Journey to the Center of the Earth (1959), but he became ill and James 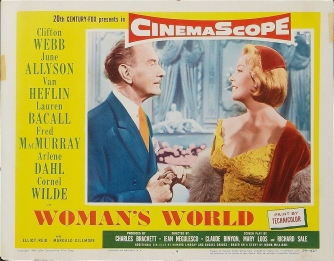 Mason took the role of the expedition leader.

Webb’s last film was with William Holden, Satan Never Sleeps (1962), a Cold War drama in which he played a missionary priest in China who sacrifices himself for others.

Clifton Webb died of a heart attack at the age of 76 in 1966.  His legacy includes a star on the Hollywood Walk of Fame.

Thank you to the Chester County Pennsylvania Association of School Retirees for their generous donation to Chester County Library. The CCPASR is celebrating its 85th anniversary and their $850 donation will be used to purchase books for people of all ages. #chestercountypa #chesco
Gong hei fat choy. Chester County Library wants to wish happiness and prosperity to all who are celebrating the Lunar New Year. 2023 ushers in the year of the Water Rabbit. In Chinese culture, water means longevity and peace, and the Rabbit is a symbol of vigilance, wittiness, cautiousness, deftness, and self-protection. People born in the year of the Water Rabbit year are predicted to enjoy good fortune and have a peaceful mind throughout their lives.
Happy #LibraryShelfieDay! We love all our shelves, but today we are highlighting our “Destinations” display. Come check out our shelves, full of new and classic favorites!
�Children, grades 3 and up, are invited to join the Chester County Library Tinkering Club to tinker with us. The Tinkering Club meets on the last Tuesday of each month from 6:00 p.m. - 7:00 p.m. at the Makerspace located on the second floor of the library. No registration is required. First come, first served. While supplies last. (Link in bio)
Planning an overseas trip in 2023? Did you know you can learn a new language for free with your Chester County Library card? Mango is the fast, easy, and most effective way to learn to speak a foreign language. There are 72 languages for English speakers to learn as well as 19 languages for ESL speakers, including courses in Spanish, French, Russian, Chinese Mandarin, Chinese Cantonese, Japanese, Russian, Korean, Italian, & more. Visit the link in our bio and sign in using your library card. #learnanewlanguage #foreignlanguagelearning #languageapp
Come and enjoy an hour of traditional Irish folk songs performed by The O'Rourkes. The O'Rourkes are a well-known family band based in Chadds Ford that has performed at pubs and restaurants (and libraries) throughout southeastern PA and northern Delaware. The show provides a great introduction to Irish folk music featuring many of the most popular songs in the genre and introductions about the history behind each of the songs. Appropriate for all ages. (link in bio).
Loading Comments...
%d bloggers like this: