We have a collection of no holds audiobooks ready for easy download to your device. To help you choose, here are three you may like. 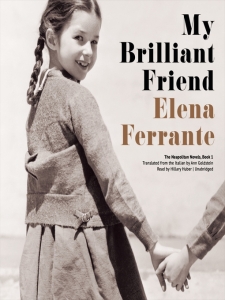 Now an HBO series: the first volume in the New York Times bestselling “enduring masterpiece” (The Atlantic) about a lifelong friendship between two women from Naples.

Beginning in the 1950s in a poor but vibrant neighborhood on the outskirts of Naples, Elena Ferrante’s four-volume story spans almost sixty years, as its main characters, the fiery and unforgettable Lila and the bookish narrator, Elena, become women, wives, mothers, and leaders, all the while maintaining a complex and at times conflicted friendship.

This first novel in the series follows Lila and Elena from their fateful meeting as ten-year-olds through their school years and adolescence. Through the lives of these two women, Ferrante tells the story of a neighborhood, a city, and a country as it is transformed in ways that, in turn, also transform the relationship between two women.

One of the twentieth century’s enduring works, One Hundred Years of Solitude is a widely beloved and acclaimed novel known throughout the world and the ultimate achievement in a Nobel Prize–winning career.

Love and lust, war and revolution, riches and poverty, youth and senility, the variety of life, the endlessness of death, the search for peace and truth—these universal themes dominate the novel. Alternately reverential and comical, One Hundred Years of Solitude weaves the political, personal, and spiritual to bring a new consciousness to storytelling. Translated into dozens of languages, this stunning work is no less than an account of the history of the human race.

Jan and Antonina Zabinski were Polish Christian zookeepers horrified by Nazi racism, who managed to save over three hundred people. Yet their story has fallen between the seams of history.

Drawing on Antonina’s diary and other historical sources, bestselling naturalist Diane Ackerman vividly re-creates Antonina’s life as “the zookeeper’s wife,” responsible for her own family, the zoo animals, and their “guests”: resistance activists and refugee Jews, many of whom Jan had smuggled from the Warsaw Ghetto.

Jan led a cell of saboteurs, and the Zabinski’s young son risked his life carrying food to the guests, while also tending to an eccentric array of creatures in the house (pigs, hare, muskrat, foxes, and more). With hidden people having animal names, and pet animals having human names, it’s a small wonder the zoo’s code name became “The House under a Crazy Star.” Yet there is more to this story than a colorful cast. With her exquisite sensitivity to the natural world, Ackerman explores the role of nature in both kindness and savagery, and she unravels the fascinating and disturbing obsession at the core of Nazism: both a worship of nature and its violation, as humans sought to control the genome of the entire planet.

Want something different? Visit our full collection of No Holds Audiobooks here. And for more information, see our post on Simultaneous Use eAudiobooks here.

When is your favorite time to listen to an audiobook?
Leave a comment – we’d love to hear from you!

Every child should have a present to open on Christmas morning — and that’s what generous supporters like you make possible. Your donation for Toys for Tots - Chester and Southern Montgomery Counties, will help save Christmas for children in need in America. Look for the donation box in the lobby of either Chester County Library or the Henrietta Hankin Branch. We will be accepting new toys and books until Wednesday, December 7th.
Today is #NativeAmericanHeritageDay. If you’re looking for a way to honor this day, learning about Native American culture is a good place to start. Here are some book suggestions:
Chester County Library and the Henrietta Hankin Branch will be closed on Thursday, November 24th, and Friday, November 25th, for the Thanksgiving holiday.
From now until Saturday, December 3rd, there will be a @ashajyothiorg donation box set out in the Chester County Library Lobby (near the front entrance) to help collect clean, gently-used coats, hats, and gloves, and also (new socks only) for our neighbors in need. Please consider giving to this great cause.
A staff member from @rephoward's office will be in the Chester County Library lobby on the 4th Tuesday of every month from 10 am - 1 pm (tomorrow, November 22nd). They can assist with SEPTA Senior Key Card applications (must be age 65+/bring your ID) as well as provide information on a variety of topics.
Happy 94th Birthday to the most recognizable mouse in the world! It was on this day in 1928 when Mickey Mouse made his screen debut in the short film 'Steamboat Willie.' The rest as they say is history as Mickey has now been featured in thousands of books and movies worldwide. #mickeymouseday #disney #disneygram #disneybooks
Loading Comments...
%d bloggers like this: